CHEMICAL RISKS IN WATER
PESTICIDES & HERBICIDES:
can leach into waterways in rural areas.
Some are potentially carcinogenic and live in the environment for a long time.
While low concentrations of these chemicals have sometimes been found,
​our drinking water is usually free of them when tested.
However, not all water authorities check for them regularly.
NITRATE/ NITRITE:
The main sources for these chemicals in waterways are sewage and fertiliser run-off. Groundwater supplies in rural areas are most likely to have high nitrate concentrations. While nitrate itself is harmless, it can be converted into nitrite, which mainly poses a problem to babies and young children - it can reduce the amount of oxygen the blood can carry. In areas where nitrate is a problem, the water supplier will usually advise people to use bottled or rainwater for children less than three months.
CHLORINE & CHLORINATOION:
Chlorine or chloramine is usually added to kill bugs in the water that passes
through the treatment plant and to protect against recontamination while
the water's travelling through the distribution system.
However, these chemicals can - depending on a number of parameters - react
with naturally occurring organic substances in the water to form potentially
harmful by-products (mainly so-called Trihalomethane, or THM).
The drinking water guidelines state a maximum concentration for these by-products.
They also point out that while their concentration should be minimised, the
disinfection of drinking water must not be compromised.
The risk posed by by-products is considerably smaller than that posed
by the presence of pathogenic micro-organisms.
FLUORIDE:
has been added to drinking water since the 1960s and 1970s as it has a proven
record of reducing tooth decay.
However, fluoride protection is now available from more sources - for example, from many types of toothpaste or from fluoride treatments applied by your dentist.
Critics say fluoridated water is unnecessary,
as it may lead to dental fluorosis (mottled teeth) in people who get too much,
and we don't know the potential health risk of drinking fluoridated water over a lifetime.
ALUMINIUM:
Chemicals containing aluminium are used in a process called flocculation,
which removes suspended particles from the water, making it clearer.
While most of the aluminium used can be filtered out of the water, small amounts
may pass through. Some water authorities have phased out the use of
aluminium chemicals in favour of alternatives. 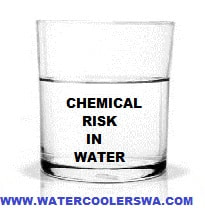 PROBLEMS WITH YOUR TAP WATER?
If your water looks, smells or tastes strange, or if your clothing and plumbing
(such as sinks and toilets) become stained by it, use our table, below, as a starting
point to narrow down the number of possible causes.
Ask your neighbours whether they have similar concerns.
This may help to find out whether it's a general supply problem, or
one caused by your home's plumbing.
Talk to your water supplier about your concerns. If you've recognised a potential problem, tell them - it may help them assess and solve the problem more quickly.
Ask them for the latest analytical results of your water supply, and the
corresponding Drinking Water Guidelines recommendations. If you still have
doubts, get a water sample analysed.
Your supplier may do that free of charge, especially if there's a health concern.
Your water supplier may be able to solve some aesthetic problems fairly easily by flushing the mains, while other problems may require more extensive cleaning or repair of the distribution system in your area, or work on your home's plumbing.
AWESOME WATER, IMPROVING OUR MOST PRECIOUS RESOURCE. Your "AWESOME " water supplier