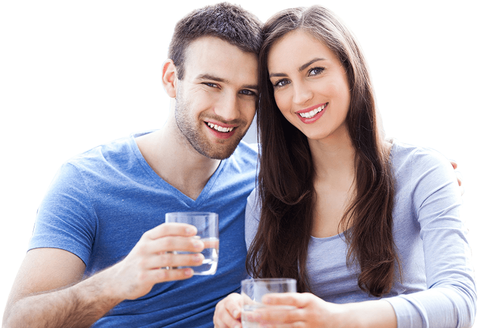 ater is a life-sustaining fluid that’s essential to health, but if you're
drinking straight out of the tap, it can undermine your health.
When you drink tap (or even spring) water, you’ll likely be getting more than you bargained for — chlorine, fluorine compounds, Trihalomethanes (THMs), assorted hormones, pesticides and even trace amounts of prescription drugs.
It can be a witches’ brew of health-killing effluvia, but you can improve the odds.
Here’s the low-down on water,
and how to turn it back into the health drink nature intended:
Tap water is dirtier than it looks.
Even “clean” drinking water that flows from the
tap isn’t what most of us would think of as clean.
It’s traveled through miles of pipeline, picking up contaminants, pesticides and industrial run-off along the way. It’s been disinfected with potential carcinogens like chlorine, ammonia and or chloramines, then “fortified” with fluoride.
While disinfection is a necessary evil — without it, water-borne illnesses would
be a constant problem — drinking, showering and bathing
every day with this chemical brew is a lousy idea.

No. Seriously. Your water is funky.
Problem is, most of us don’t have a clue about the chemicals and
contaminants in our water, nor do we know their long-term effects.
We trust that everything is OK, but it’s not.
In fact, the Environmental Working Group spent three years investigating
the country’s drinking water and the results were jaw-dropping.
They found that roughly 85% of the population was using tap water laced
with over 300 contaminants, many with unknown long-term effects
and more than half of which aren’t even regulated by the EPA.
Add to the mix an ever-growing list of new chemical compounds that come online
just about every day and well, the waters only get murkier.

Bottled water isn't better, cleaner, or good for the earth.
Let me be blunt: there’s just no good reason to drink bottled water — and if you’re one of those folks who buys it by the case,
I beg you to stop.
Bottled water is virtually unregulated, expensive, and even the
EPA says it’s not necessarily safer than tap.
It’s also insanely wasteful — an estimated three liters of water is needed to produce j
ust one liter, and roughly 17 million barrels of oil is required to produce
all those bottles, according to The Pacific Institute.
What’s worse, roughly 2/3rds of those bottles wind up in the ocean and in landfills,
polluting and poisoning waters and wildlife.

Brew your own – with the help of water filtration systems.
So, how to tamp down the bad stuff in your brew?
The best way to go is a water filtration system.
For starters, look for one that’s certified by the NSF, an independent, non-profit group that tests and verifies the contaminant reducing abilities of water filters.
Next, you’ll need to determine how far you’re willing to go, based on your needs
and budget. Ideally, whole-house filtration systems are an
excellent option, but they’re not always feasible.
If whole-house filtration isn’t appropriate for your home, then I recommend
investing in individual drinking water and shower filter units.

Tap into your tap.
For drinking water, there are different ways to go, with the three simplest options being under-the-counter filters, counter top filters and pitcher systems:

daily exposure to chlorine, carcinogens and vaporized chemical contaminants
being absorbed into your skin and breathed into your lungs.
Without a shower filter, it does.
A few simple tips to cut exposure: Clean up your act, but kick the tires first.
Water filtration is a simple, no-brainer way to support your health by preventing toxic chemicals and carcinogens from entering your body –
and everyone should do it.
AWESOME WATER, IMPROVING OUR MOST PRECIOUS RESOURCE.