​The bottled water industry has grown rapidly
over the past few years.
Today, the convenience of disposable water bottles means
that we can find bottled water almost everywhere we go.
It’s no question that plastic bottles (and bottled water)
are bad for the environment.
Not only do they require a lot of energy to manufacture,
but they pollute the environment as well.

Plastic bottles are not biodegradable
In order to fully understand what this means,
it is important to understand the difference
between biodegrading and degrading.
Biodegrading is when an object gets broken down
(digested) by living organisms.
This means that the object can be naturally recycled
(by decomposers like bacteria and fungi)
into new organic molecules and new life.
On the other hand, degrading is just the process
​of breaking down into smaller pieces. 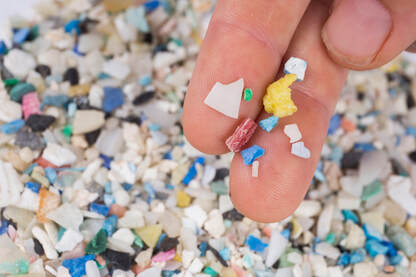 Plastic bottles are not biodegradable

The bottom line?
Plastic cannot be recycled by living organisms.
Instead, a combination of the sun’s energy and
environmental factors like rain will continue to degrade
plastic down into smaller and smaller pieces.
These pieces of plastic (also known as microplastics)
will always remain on Earth as plastic.
With that being said, it can take up to 1000 years
for a plastic bottle to degrade.
However, plastic bottles do not biodegrade,
so they will remain in our environment forever.
When plastic degrades, toxic chemicals in the
plastic are released into the environment.
Worse yet, any plastic that makes it into the
environment will stay in the environment,
forever harming wildlife in the future.

Production of Plastic Bottles Requires Fossil Fuels One big problem with plastic, of course, is that its production requires the use of non-renewable fossil fuels.
Plastic bottles are no exception to this.
Most plastic bottles are made from
a plastic known as PET
(polyethylene terephthalate),
which is produced using oil.
Worse yet, the production of plastic bottles
isn’t the only time when energy is wasted.
In fact, energy is used during the entire lifespan
of a plastic bottle:
This includes the energy used for transportation, s
torage, and the final disposal of the bottle.

In the USA, about 76 million barrels of oil are needed to manufacture, transport, store, and dispose of the plastic bottles (for bottled water) used in a single year.

That’s enough oil to fuel 4.3 million cars for one year! Worldwide, the energy embedded in our use of
bottled water is equivalent to 450 million barrels
​ of oil each year
(based on statistics from 2012).

That’s enough to fuel 25.5 million cars for one year.
Fossil fuels are non-renewable, and they contribute to greenhouse gas emissions and climate change.
It’s no question that they’re bad for the environment.

3. The Extraction of Water resources for Bottled Water harms the Environment Do you ever wonder where the water in bottled water actually comes from?
Well, when water gets extracted to be sold
as bottled water, many natural water supplies dry up.

This has lots of adverse effects on the environment,
and could even affect the livelihood of humans as well.
For example, many bottled water companies
extract water in California, which is an area
that is prone to large-scale droughts.

Obviously, the removal of water resources
from an area already prone to drought
just makes droughts more likely to occur.

This problem is compounded by the fact that
most bottled water gets sold in areas
far from the extraction site.
This means that local water resources
never have the chance to recover through the water cycle,
since this water resources are transported elsewhere.

The over-extraction of water resources can change entire habitats and ecosystems, making the area drier and threatening the livelihood of all living things in the area. 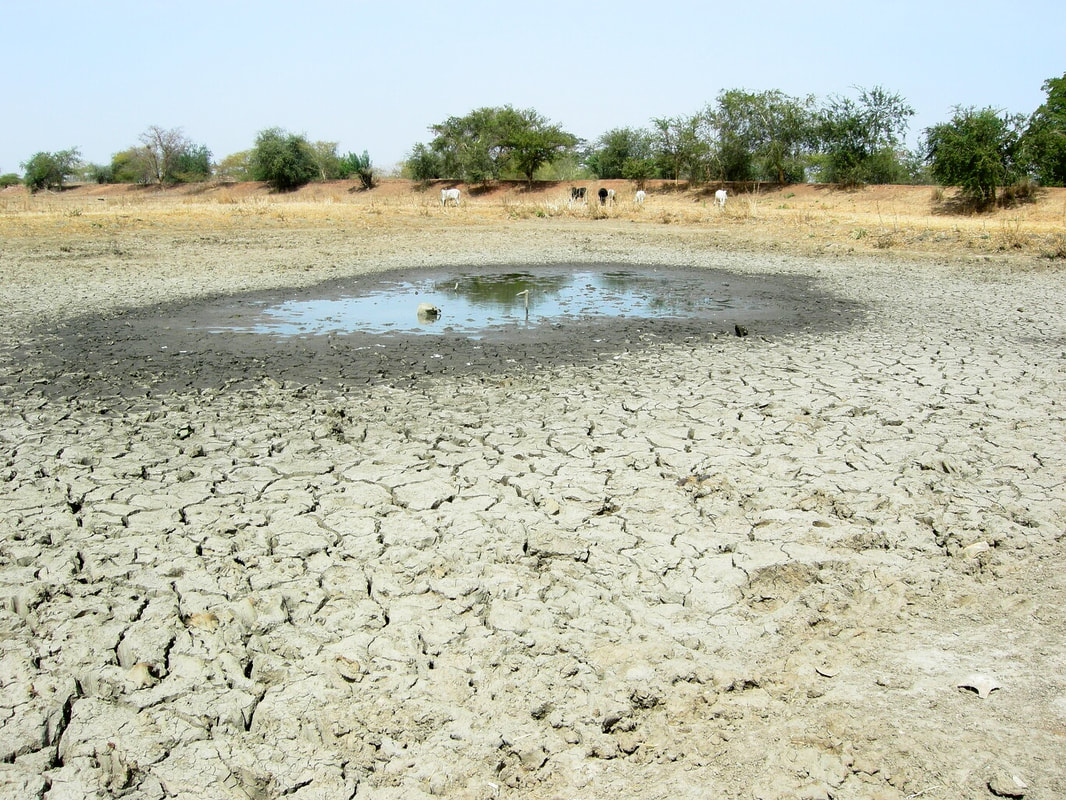 Bottled water companies often extract so much water resources that entire lakes (lakes and supplies of groundwater) run dry.
. Creates Plastic Pollution and Harms Marine Ecosystems Nowadays, plastic bottles can be found littered almost anywhere you go.
The sheer number of plastic bottles sold each day
means that many of them end up being improperly disposed of.

It is important that we do not underestimate
the severity of this problem.

Plastic bottles are currently the 5th most commonly
found trash coastline cleanups (by quantity),
making up a sizable portion of the total plastic pollution in oceans.

In fact, most plastic that is littered eventually ends up in the ocean. Even plastic on land, far from an ocean, eventually gets blown
or washed (by rain) into a body of water.
The plastic then moves with drainage networks
or rivers and eventually flows into the ocean.
So, why exactly is plastic pollution
so bad for the environment?
Animals like birds or fish can mistake plastic in the ocean for food.
In addition, because plastic can come in sizes large or small,
even the smallest organisms like plankton could be affected.
When an animal consumes enough plastic, their digestive systems could get clogged up, eventually starving them to death.
Sometimes, the uneven shape of plastic pieces
could even choke animals, like sea turtles, to death. 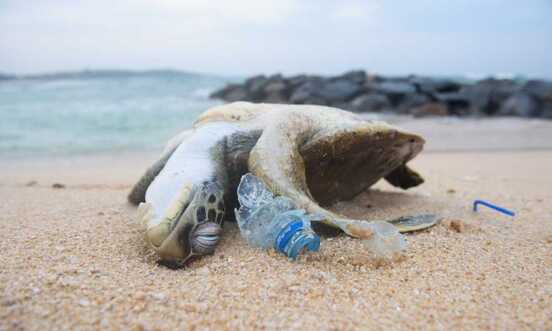 What’s worse? Once plastic is ingested by an organism,
it can move up along the food chain.
When predators eat prey with plastic in their systems, the plastic gets passed along into the next animal in the food chain.
For example, let’s say that a school of fish accidentally ingests microplastics that were present in ocean water.
When a predator like a shark eats those fish, the microplastics are passed on by the fish and accumulate in the body of the shark.
In the North Pacific alone, an estimated
12,000 - 24,000 tons of plastic end up in fish each year.
Over 1 million seabirds and 1000,000 (one hundred thousand mammals) die from ingesting plastic yearly.
Seafood with plastic or toxic chemicals in their bodies could be passed along to humans as well.
Microplastics, too small for us to see, could be present
in the fish that we eat! Plastic ingestion could cause
a large number of long-term negative consequences.
If we continue to trash our oceans, the plastics we use
and toss could come back and bite us in the back.

How you can help solve this problem:

Use a Refillable Water Cooler & Filter Your Tap Water
Water Bottle Of course, the easiest way to solve our plastic problem
is to simply stop using single-use plastics like plastic bottles.

This, in turn, means reducing our consumption of bottled water.

One way to reduce our usage of bottled water is to use a
Refillable Water Cooler & Filter Your Tap Water.

Instead of buying packages of bottled water,
you can buy a Refillable Water Cooler
to reuse over and over again.

This not only helps save the environment,
but also helps save money in the long run.

However, in most parts of the US and Canada,
tap water is completely safe to drink.

You can check the quality of your tap water by searching on
Google for “City Name tap water quality report.”

Dispose of Plastic Bottles Properly:
DO NOT LITTER
If you are unable to get a Refillable Water Cooler  (for whatever reason)

IF drinking bottled water, make sure that the
leftover plastic bottle goes into the recycling bin.

If there isn’t a recycling bin, throw it in the trash can.

Whatever you do, DO NOT litter!

Even one plastic bottle can harm the environment!
Spread Awareness and Tell Your Friends!
Another way to help with our plastic problem
is to spread awareness about the issue.

The more people who reduce their usage of single-use plastic,
the better! Feel free to share this article to spread
the message and raise awareness for our bottled water issue.
​
You can just tell people about the issue in person!
Together, we can tackle this global plastic problem.