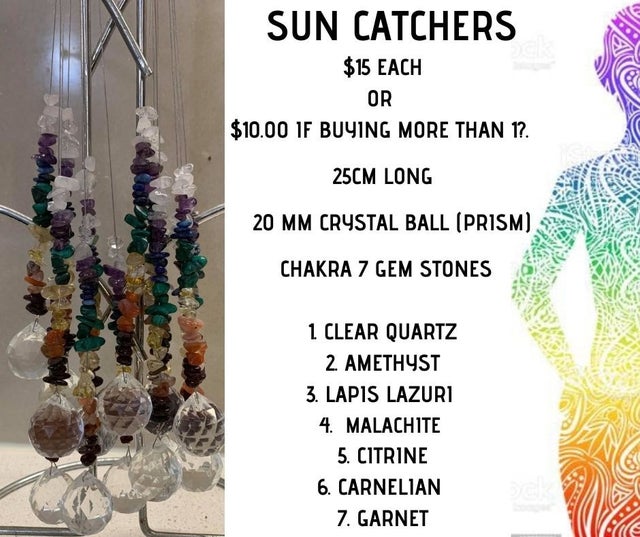 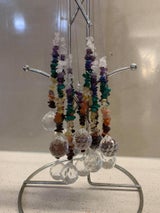 These can be paid using my Paypal with my email address mandurah@iprimus.com.au

Can be posted out $15.00 for Red satchel (wrapped in bubble wrap)

The Spectrum Colour healing has been known for many years.

In a rainbow, there are seven colours - red, orange, yellow, green, blue, indigo and violet.

These are the colours of the spectrum.

Crystals come in many colours and it makes sense to collect crystals in a variety of colours.

To have several red or yellow stones in your collection is a good idea.

You can bring in colour healing through your choice of crystals in that colour.

In this way, crystal can be used as an aid for healing through the actual colour of the stones.

The Seven Chakras The chakras are energy portals in the body.

There are some crystals associated with each chakra.

You can use the colour of the chakra to help you choose a crystal in line with its meaning.

The root chakra is found at the base of the body in the area where things are eliminated and expressed from the body.

The sacral chakra is also known as the navel chakra.

The sacral chakra is coloured orange.

Crystals associated with the sacral chakra are carnelian and orange zincite.

The solar plexus chakra is in the soft tissue.

The colour for the solar plexus chakra is yellow.

Crystals associated with the solar plexus chakra are all yellow/amber stones including citrine, yellow topaz and yellow sapphire.

The heart chakra is over your heart in the centre line of your body.

The heart chakra is coloured green.

Crystals associated with the heart chakra are aventurine, emerald and jade.

The throat chakra is found on the front of the neck near the vocal cords.

This chakra has much to say about speaking and communication.

The ability to speak up and speak out is governed by the well-being of your throat chakra.

The colour for the throat chakra is blue/turquoise.

Crystals associated with the throat chakra are turquoise and blue lace agate.

The third eye chakra is found on the centre of the brow above the eyes, thus the term third eye).Your third eye is said to be the ability to read psychic messages and have a highly developed intuition.

The colour associated with the third eye chakra is indigo blue.

The crystals for the third eye are sapphire, lapis lazuli and sodalite.

The crown chakra is coloured violet and the energy emanates upwards out of the crown of the head. This is the ultimate evolution for souls. Crystals for use in the crown chakra are amethyst and clear quartz.